The famous rolling chairs are an icon of Atlantic City Boardwalk.

First introduced in 1887, during a conference the chairs have been part of the Atlantic City tradition ever since.

Many of the rolling chairs today are just the same as they were when they were first introduced. Each one seems to have it's own individual character, it's little features that make it unique.

A ride in one of the chairs generally starts at around $5, which will see you pushed 5 blocks. For maximum value, you would be advised to go for a $20 ride, which will get you pushed over 32 blocks.

For some visitors, the prices might seem steep, but you have to remember that riding in a famous rolling chair is riding in history.

When you ride in a rolling chair on the Boardwalk you are doing exactly something that has been done by your grandparents and possibly, their grandparents too - it's hard to put a price on being part of an american history that runs for many generations.

Of course, don't forget to tip - pushing those things is hard work! 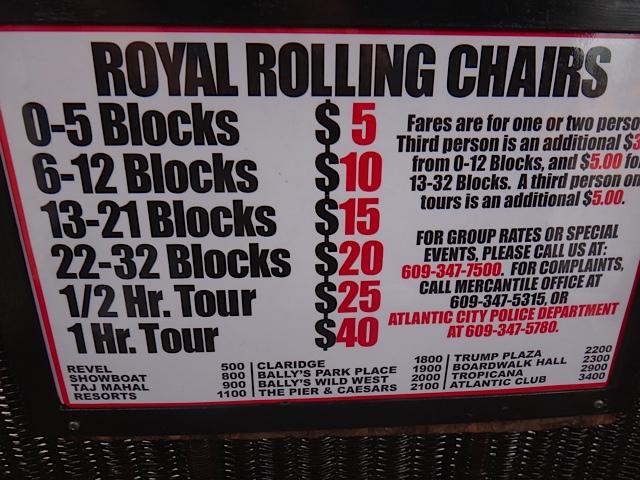